I was on the phone with her, and could still hear my colleague screaming from the other side of the building—it was surround sound, “If I had read this earlier I would have never agreed to go on this trip!  What have you gotten me into!!”

Understandably, she was a bit overwhelmed when she first read the travel advisory for the Democratic Republic of Congo while we registered on the U.S. State Department website together, virtually.  American aid workers had recently been kidnapped and even more are sometimes the targets of violence.  This is bad enough but nothing compared to the millions who have been killed and the thousands of women and children who are daily raped and disfigured as a result of a long war in the country.   Even the name of our host organization, Women in War Zones, awakened the cortisol in our bodies.  This was not just False Expectations Appearing Real kind of stuff.  It was really “real” and “know what you are getting yourself into and be prepared”.  This was a tough place. The work was central to our mission–to bring hope and healing in the tough places of the world–it is where we needed to be.

To be honest, it was 4am and neither of us had had any sleep as we made last minute preparations.  Being a professor and non-profit leader, along with being a landlord requires a lot of detail work before a service trip.  Packing is low on the list.  Yes, I usually stuff things in a bag a couple of hours before I go anywhere—to my wife’s consternation. She usually packs two weeks ahead of time.  I chalk it up to her German heritage and fastidious nature, which I appreciate about her since she puts up with my mess, most of the time.   Having moved and travelled so much in my life I pack very light and late.  It is a “go-bag”.  Everything I needed for this 10-day service trip to the Congo fit in my canvas briefcase, including computer and camera.  I was actually more anxious about driving to the Newark Airport than I was entering the Congo.  Our host had confirmed that UN troops were based in Bukavu—it was “relatively safe” and she was going to meet us in Kigali, Rwanda and ride with us to the border.  As it turned out, it was harder to get to Newark from Philadelphia than from Kigali to Bukavu, DR Congo.

In New Jersey, we took a wrong exit on the turnpike and traversed back and forth across the river several times until we made our way back to the airport.  Asking for directions was an exercise in “Where’s Waldo” as no one seemed to know the way.  Julia, who sat quietly in the back seat absorbed in answering emails on her phone, ignored the tension, as my colleague and I began to snap and snip realizing that we might be late for our flight.  We weren’t.  Twenty hours later we were greeted by our host in Kigali, Rwanda and headed for a good night’s sleep in a really decent hotel. 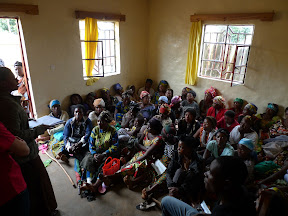 This was the planned art room for 20 people. 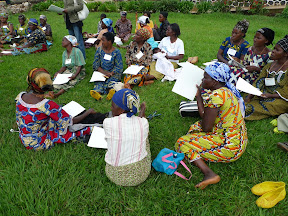 The outdoor classroom worked fine, even when a snake dropped from the tree and scattered the group for a while.

Women in War Zones, our host, runs on a tight budget.  The in-kind contribution of our arts-based psycho-social support project for what we thought were 30 women–but became over 100–cost more than their annual budget.  Since we ask organizations to be equal partners in a project, we live as they are able to provide locally.  It is a practice I developed 30 years ago in Kenya—I would provide the training for free, you provide my food, bed and local transportation.  This more than once turned out to be cooked corn meal and greens (sometimes a goat tail or field rat), a bed with three other people sleeping next to me (spooning was optional), and walking or riding a local bus.

This reminds me of a story worth telling at this point.  Many years ago a friend and I had been invited to provide training in a remote Masai village.  We met in a lone, small local church building with concrete floors and two back rooms.  The rooms opened out on the Serengeti with vistas of acacias, tall grass and open skies—a boundless habitat for nomadic people, the cattle they herded and the wild animals that stalked them.  There must have been 50 young men (Moran) who came dressed in their traditional sheets wrapped around their bodies, wearing sandals and carrying spears which were used to protect their bomas (homesteads) from roving lions on the plains where they lived their nomadic lives.  Underwear, and in general western clothing, was a nuisance in the heat on long nomadic journeys, so the “sheets” alone provided comfort and coolness.  As it came evening, we supped on a delicious meal of “nyama choma”, or barbequed goat, and hot tea that had been prepared outside the building on an open fire. The leader asked if we would like to sleep with the students.   “Sure, why not.”  I made my way back to the room and realized the practicality of the sheets.  They began to take off their sheets and spread them on the cold floor, lying down together and spooning themselves for warmth, while covering themselves in the remaining sheets.    I suppose I could have left my clothes on and joined them—I am not one to expose myself—when my friend came into the room and offered, “I happened to bring some cots and sleeping bags if you prefer?  I preferred.  There are limits to my identification with local culture. This was a boundary issue.

So the next morning in Kigali, when it was time to make our way to the bus station, a taxi to the airport would not hold all of us. Our host asked one of us to take a Moto (motorcycle).

I volunteered in order to take some footage of Rwandan roads and the scenery—and frankly I didn’t want to put our artists at risk.  Making our way through the newly paved streets and contemporary landscapes we entered the local bus station.  This is the Africa I was familiar with—crowded, noisy and bustling with hawkers.

We boarded the Impala bus line super van that would hold about 24 people—packed shoulder to shoulder along with our luggage at our feet.  Being the oldest, greyest and probably the whitest, I was led to a seat up front.  A young mother and her child had taken someone’s seat in the very back and so a young Rwandan man was asked to take the fold-down seat next to me in the middle—I’m not a fan of riding with babies—so I was relieved.  Young boys lined the aisle with one young boy sucking away on a lavender candy.  During the journey the driver—like most African bus drivers–was both driver and DJ. 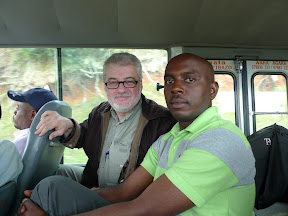 Throughout the 6-hour journey he selected country and western, easy rock, Rwandan pop and the news from his digital system.  During the Kinyarwandan talk show I asked my seatmate what was being said.  Seems that a Rwandan bank loaned a developer a lot of money (in the millions) to build upper-end houses.  These were all sold to upper class Rwandans.  The developer skipped the country and now the bank wanted to get the money back from the owners who had already paid the developer for them.  Paying twice was not right and the government had yet to take action.  People were talking.  This question led to a delightful conversation with my neighbor who happened to be a guide in the national park.  Fluent in French, Kinyarwandan, Swahili and English, I got a great lesson in the history and benefits of the newest national park, Nyungwe http://www.rwandatourism.com/parks.htm, where he guided guests from all over the world.  We were headed through this mountainous park on the way to the border. It had its own danger.

“It is death, when it comes” is one of the first songs I remember learning on a musical survey to Rwanda in 1988.  This song, and others like them encapsulate the culture and this one perfectly described the danger of the roads in the hilly and mountainous terrain.  It tells the story of a young man who road a bicycle without brakes.  He would walk the bike up the long hills and then climb aboard to speed down the next hill.  No one knows when he may loose his balance–or life—but death is sure to come.  The Kenyans sometimes say, “Amefurahi kufa,” literally “he is happy to die.” 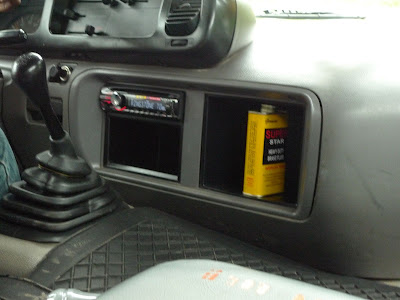 As we made our way through the mountains swerving and down hilling, passing slower vehicles, I noticed next to the digital sound machine the with the driver consistently changing with the remote in his hand, a partially used container of brake fluid. I wondered when the last time he used it, as I could hear the brakes grown and jerk slightly at each turn.

Suddenly, the entire bus screamed in a unified gasp and groan.  All I could hear was a splash and then see lavender projectiles go past my head.  The boy with the candy had upchucked and hurled onto the boy in front of him whose back head was covered in vomit along with one of our bags.  We thereafter called it the vomit bag and no one wanted to carry it.  I was elected. Then another passenger was affected and the floor near the door was covered in–well you get the picture.  This is, as we were told, a common occurrence on these bus rides.  Customer service is not to the point of handing out “barf bags” and certainly raincoats are not.  Nothing was cleaned and as passengers boarded and alighted, it was only a minor inconvenience mostly unnoticed—except for those of us who had lived through the experience.

Oddly, the closer to the boarder with Congo, the safer we began to feel.  A car and driver from Panzi Hospital, where we would work, greeted us and walked us through both the Rwandan and Congolese borders.  At that point the only indication of difference was the Congolese immigration official who hand-wrote our entry information into a ledger.  Nothing was digital.  UN and aid vehicles lined the road giving assurance that whatever happened there was some protection, maybe. 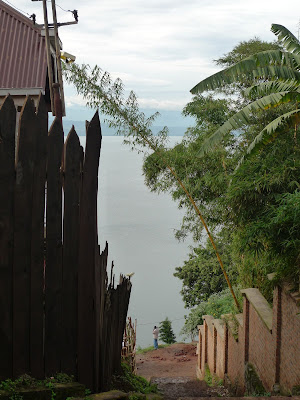 Making our way along a bumpy, potholed, and sometimes slippery road through Bukavu, we entered a well-guarded compound where we would spend the evenings in relative comfort and safety. Inside, our host did what every host will do, give us the safety rules for which we were glad to receive.  Don’t go out after the sun goes down.  Never go anywhere alone.  Stay out of the night bars where the UN and others hangout.  And here—–a sobering instruction was about to be spoken that reminded us we were in a war zone with a UN travel advisor—-We have an evacuation plan.  Take this plastic bag, put your passport in it, and if needed, swim across Lake Kivu to Rwanda.  It is a two-mile swim and your only exit.

We made our beds and went to sleep.  Frankly I was too tired to think about swimming.