Some family history for my daughter’s 40th birthday.

I don’t really remember the drive from Americas, Georgia Hospital where she was born.  Actually I really don’t remember too much about the first year in Montezuma except the way it go started.  We left Mars Hill, N.C. in the Appalachian mountains for the deeper south after looking for a teaching job for some time in 1971.  There were no job openings near home in the gorgeous mountains of home that had nestled our us, our family and friends.

We drove south past Atlanta.  On the way I remember asking for directions from one crusty person we met who commented with contempt, “What are you doing down there? The only thing you’re gonna find are sand, fleas and niggers.”  I have never used the last word, but upon hearing the phrase immediately pegged him as a Georgia “red-neck” and wondered what other blatant attitudes people would be wearing like cancerous sores on their tongues.

We finally accepted a position with the Macon County School District in Montezuma, and while there were plenty of people wearing those sores when their tongues hung out, there were plenty who were not–though on reflection I think there may have been more of the former, the later just seemed to be healing a little better after the Civil Rights Movement.

The town was split by a railroad track which we were advised never to cross, “That’s where the Negras live and it ain’t safe at night–or any other time for a white person.”   Most of my students lived across the track.  On occasion I would venture across to find one of my black drummers who had been absent.  I was never afraid, but I don’t remember ever being welcomed by the community either, though my students always seemed comfortable to come to my house for visits.  Sometime in the 80’s a banker acquaintance of ours was gunned down on his front porch in front of his two little girls by a black man who apparently was frustrated over a loan.  The cancerous sores came out that night.  It was maybe a decade later in the 90’s that the small town of 3,000 elected a black mayor and finally formalized a healing process for the historically divided town. 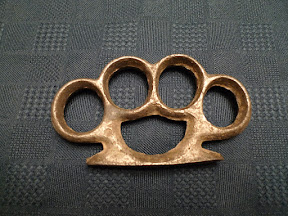 Working in a public school then, as now, can be challenging.  During desegregation in the 1970’s, the good white folks in the county, those with the money, started a Christian school leaving the public schools full of a majority of blacks (rich and poor) poor white farm kids, and the socially liberal dedicated to public school education.  Within the first weeks I was confronted by students with knives and even a pair of brass (actually aluminum) knuckles.  I still have the knuckles in my possession (see image). I was even picked up by a large young farm boy not much younger than me–I turned 21 the first year of my teaching–who slammed my body against the wall.

I was concerned for my safety.  I’ll have to tell the story of paddling as a discipline another day–a method I am not sure really worked.  I decided to drive to Americas and take karate lessons for self defense.  That too is another story, and while I never got past a white belt because the instructor nearly broke jaw, “It teaches respect,” he quietly and unapologetically commented,  I did gain some confidence and learned the meaning of a “game face.”  I could stare down anyone–and a slight crouch in a fighting position always added an effect.  Looking back on it, I’m lucky no one called my bluff–I was a mere 130 pounds.  By and large though, the kids were peaceful, fun, interesting, and adolescents looking for trust and love.

Vickie was pregnant and showing when we found a little house, thanks to the school’s administration.  It was a square-of-a-box government barrack that had been rehabbed by a developer.   I don’t remember the rent, but on $10,000 a year and a growing family, it was affordable–and on the “right side of the tracks.”  The living room, kitchen, bathroom and a single bedroom in the back could not have been more than a 1000 square feet.  The front door opened on a better block with larger houses.

We didn’t know our neighbors very well and pretty much stayed to ourselves for the first several months–people on the “right side of the tracks” didn’t ever make social calls–so we pretty much felt content to be alone in the first year of our marriage.  I worked, came home, and we stayed together waiting–our baby girl would be born soon.

The evening before Thanksgiving was unusually cold.  We prepared for bed and lay down as usual.  It must have been about 3AM and Vickie shook me awake, “Nathan…someone is in the house!”  The door to the bedroom was closed and on the other side I could hear what sounded like broken glass.  I was ready.  In my briefs, I crouched in my karate position, took a big breath an swung open the door with the loudest guttural scream I could muster.  Then I saw something more frightening than a burglar.

“Vickie, get out of the house, it is on FIRE!”  In her bathrobe Vickie, now seven months pregnant with our little precious girl, flung the front door open, ran 2 steps on the front porch and jumped off running down the street toward the neighbor’s houses across the street–flames blew a hole in the screen door behind her.  I didn’t see where she went.  I had headed for the phone in the kitchen to call the fire department.  The house quickly filled with flames and especially smoke and I was beginning to choke.  I found my way to the front and closed the door behind me.  Vickie was running back from the neighbors with a pair of pants.  She always thinks of these things.  The trousers, made of a very light summer polyester warmed nothing up but my embarrassment at standing in my briefs in front of the gathering neighbors.

We all stood outside the burning house waiting for the fire truck. We waited.  At this point you need to know that in this little town of 3,000 there is only a volunteer fire department with two trucks.  In the days before texting, instant messaging and cell phones, you made a call and waited while the volunteer would call all the others and they would gather at the fire station.  We waited.  Finally, after what seemed like an hour, but was probably thirty minutes, two trucks arrived.  The firemen, moving with a true sense of urgency hooked the hose to the fire hydrant, braced themselves for the gush of water and…nothing.  There was no water pressure…nothing.  One would have to laugh it it were not so serious.  The gathering neighbors–now a crowd–stood and watched and conversed about the incident.  One fireman jumped in his pick-up and headed back to the station, to find the truck with water.  He soon returned, alarms blaring, and the fire in the square-of-a-box house was extinguished, but not before everything was destroyed.

The good that came from this was astounding and quite touching to us.  Our neighbor, the county sheriff who we did not know, offered for us to stay in his house for the night.  Another person came and invited us to Thanksgiving dinner.  The pastor of the local church had taken a collection of what I remember to be about $200 along with clothes and an invitation to come to the service–we did not attend church in those days.  I would later leave the school district and become the music director of that church.

Within weeks, and the help of the church, we found a three bedroom house with a large yard in different neighborhood a walk away from the railroad track.  In the afternoons I could walk toward a small cliff and stare down as trains passed leading toward the town center.

In was in this time and place that our little daughter was born.  We had searched name books for months and due to my interest in my English-Irish roots we liked the idea of a beautiful flower–Heather.

I wasn’t really there actually.  It was a C-section birth because Heather was breached in the womb.  All of Vickie’s births were this way and each time she would come home sore, tired and unable to do more than get herself out of the bed–with my help–to go to the bathroom.

I remember bringing our perfect little girl to sleep with us at night.  Vickie would nurse her between us and then I would take her to her crib.  Sometimes she would sleep the night in our bed. And yes, I changed her diapers until Vickie was able.  She was a very beautiful baby, perfect actually.  She had one character issue, which I now believe to be genetic.  She was strong-willed–like the Corbitts.  She was never one to be pushed–but guided–and while she pushed the boundaries–she was always was aware of where they were.  Case in point.

I think Heather would have slept in our bed for the rest of her life if we had not taken steps.  Vickie was unable to continue breast feeding and so we resorted to the bottle.  The move to her room and crib took some time.  But the crib would not contain her.  Heather would cry and scream to return to our bed.  We gave in, initially.  But then it came time for us to get some rest and Heather to become independent.  I let her cry.  And cry she did.  Vickie would want to go to her, and I would literally hold her in bed.  Throughout our married life we had a conflict.  How to discipline our kids.  It was a conflict that would intensify at times.  But in this moment we agreed, Heather needed to learn to be alone, sleep at night in her room–she could not live her life in our bed between us, and begin to give up her bottle.  Months later Heather would sleep alone, “When it is time to go to sleep it is time to go to sleep.”  was my mantra.

One event stays in my mind about Heather.  She would always reach for what she wanted.  One night as I put her down and we retired to our room, it became very quiet.  Heather was never quiet.  I entered her room.  She had climbed out of her crib, up and onto the dresser where I had the bottle.  How she got there I do not know.  But I learned,  If she really wants something, she does what she needs to get it.  It is genetic.  It is a drive to succeed.  It is also driven by a sometimes dependence on what has given her the most pleasure.

As sweet Heather becomes 40 today, and as I reflect on the birth of that perfect baby girl who was nurtured with love and grown to a successful women, wife and mother, my hope is that she will remember the love in which she was born, the boundaries set for her, the calling and mission she has received, and the courage it takes to live each day.  Happy Birthday Heather! I love you.